Research in planetary geology at the University of Georgia ranges from planetary surfaces to interiors. We investigate the evolution of planetary bodies by geochemical analysis of meteorites from Mars and other bodies to gain insight into their volcanic histories and nature of mantle reservoirs, by studying the thermodynamics and thermal physics of planetary-scale processes, and by observing planetary landforms to learn about the geology of solid surface bodies. Geoffrey Howarth’s research concentrates on the petrology and geochemistry of meteorites. He focusses on constraining the volcanism, magma water abundances, and the evolution of mantle geochemical reservoirs on Mars and the Moon by characterizing the mineralogy and geochemistry of meteorites formed through volcanic process on their surfaces. Christian Klimczak’s research concentrates on global or large-scale tectonic processes on the terrestrial planets and icy moons to characterize long-wavelength topographic phenomena of tectonic origin, study the geomorphology of fault-related landforms, utilize fault population characteristics to learn about the underlying processes that caused the faulting, and investigate the role of tectonics for volcanic and magmatic processes. 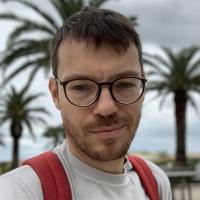